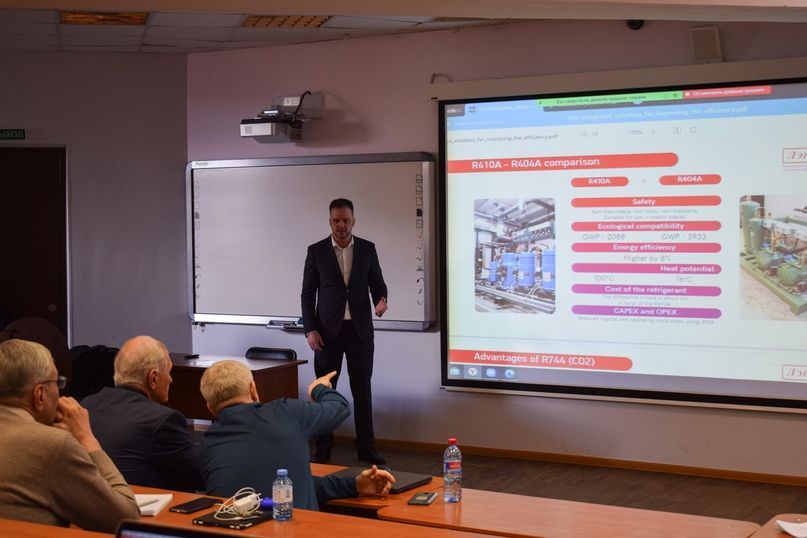 On April 23, 2021, Land took part in the international conference "Sustainable and Efficient Use of Energy, Water and Natural Resources". Technical Director Sergey Pleshanov made a presentation on "Integrated solutions for improving the efficiency of engineering equipment for commercial refrigeration facilities".

In conditions of serious competition in the retail market, technical solutions that reduce the cost of operating the store's refrigeration equipment are becoming increasingly relevant, since it accounts for more than 50% of all store costs.

The report considers an integrated approach to reducing energy consumption at commercial refrigeration facilities of small, medium and large formats, provides data on reducing the operating costs of experimental models and payback periods.


Installation of closures on shelving showcases (slides) is currently the simplest and most effective way to reduce cold consumption and, in turn, energy consumption of equipment. The use of double-glazed windows as the closure of shelving showcases allows to reduce cold consumption from 50 to 70%, which means to significantly reduce the capacity of the refrigeration unit, the condenser and the volume of mounting materials. That is why this technology can be called the most effective at the moment.

The shortage of electrical power and the lack of an affordable heat source is the most common obstacle to making a positive decision to open a store, even in a geographically attractive location. This fact forces store owners to pay attention to alternative ways of heating and getting hot water. A refrigerating machine with an integrated air/air heat pump running on a refrigerating agent R404A and the prospects of using R410 are considered.

Carbon dioxide (CO2) is the most effective and environmentally friendly alternative to commonly used refrigerating agents in the regions. A refrigeration unit with a natural refrigerating agent (R744) with a high-potential heat recovery function and a number of energy-saving options that significantly reduce operating costs are considered, the solution is shown by the example of equipping a distribution center with a cooling capacity of 2.2 MW. The prospects of using carbon dioxide systems in small and medium-sized formats are also shown.

The general solution is the concept of "Smart Store" - global automation of the store's engineering systems, which allows optimizing the operation of lighting, heating, ventilation, air conditioning and refrigeration of the store.

We use cookies. They help improve your experience with the site.